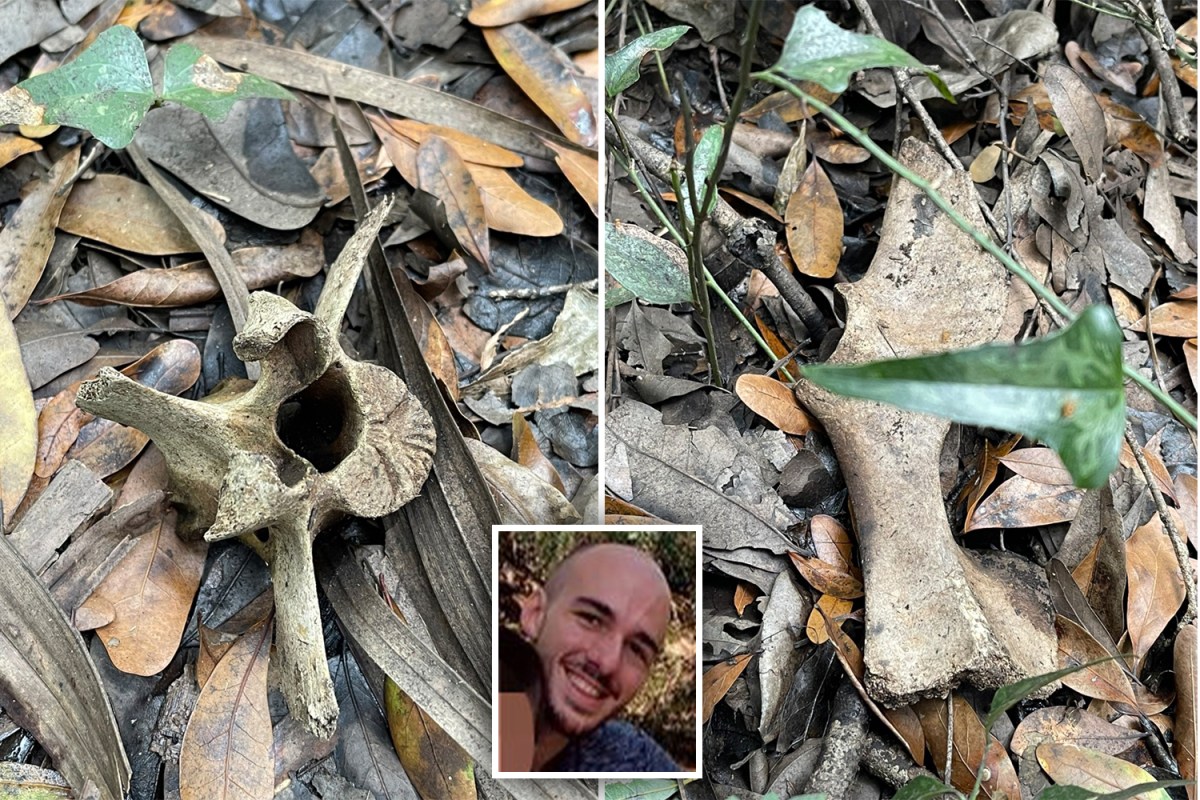 WEB detectives wonder if Brian Laundrie was eaten in a Florida nature reserve, as “alligator bones” appear to have been spotted near where the fugitive was found.

No cause of death has been announced, as the autopsy was inconclusive, fueling speculation among web detectives.

A Twitter user, known only as Olivia, claims to have found “bones” about 60 meters from where Laundrie’s remains were allegedly unearthed.

She teased “Could be an animal” by uploading several snapshots of the find.

One detective said, “Definitely gator. They have these long tip extrusions on the spoke bones. I feel like when the water levels rose the alligators migrated towards him and then came back father as the water receded.

Another hypothesized, “I’m sure these alligators roam around and don’t just stay in the water.”

Alligators kill their prey by clenching their jaws before dragging them underwater. It is not known how Laundrie died.

Some have claimed that the bones appear to originate from the bottom of a spine or tailbone.

A Twitter detective claimed the “bones” were not “human remains” while some detectives suggested the find could be “deer vertebrae.”

The discovery comes just days after hikers spotted a water bottle in a clearing in Myakkahatchee Park.

It was also near where Chris and Roberta Laundrie found their son’s white bag, according to Fox News journalist Michael Ruiz.

A similar-looking Nalgene water bottle can be seen in a video Gabby uploaded to her Nomadic Statik YouTube channel in mid-August.

He said: “We have a photo from before he left on his trip. It looks like the bottle. I don’t know why it would be left there. It’s beyond me.”

A statement from North Port Police Department spokesman Josh Taylor said: “As far as I know, nothing related to this case has been found. A bunch of false reports. However, this is an FBI investigation and they should talk about whatever is found. They can find out more.

Since Laundrie’s remains have been identified with certainty, web detectives have been wondering how the 23-year-old died.

Tom Joyce, a retired NYPD commander, told the Sun exclusively that the remains had likely suffered “a lot of post-mortem predation.”

He said: “If the remains are skeletal, it means the tissue has been removed from the bones.

“Most likely by alligators, crabs, fish and stuff like that. That’s what it sounds to me because it’s definitely not enough time for it to happen naturally.”

He added: “If this is only a three to four week period and there is only very limited skeletal remains and tissue left, I have to say that there is a lot of activity. that rip all the skin, flesh, muscle, and all that. “

Joyce said that during the first two days of submerging a body in water, the hands will start to swell.

He added: “After five or six days the skin starts to separate a bit and the putrefaction sets in. This is where bacteria and microorganisms inside the body cause it to explode and explode.

“It can also affect whether a body floats or sinks, which in turn affects how a body breaks down.”

Joyce surmised that Laundrie could have died accidentally, of natural causes, and suggested that he could have been attacked by an animal.

John Widmann, who lives about half a mile from the Carlton Preserve, told the New York Post: “The worst part are the wild pigs. They are evil animals and they will eat anything. Any flesh in the open will not be wasted. “

Cops roamed the Carlton Reservation in Sarasota for weeks as Laundrie went missing on September 17.

FBI teams and sleuths searched the 25,000-acre reserve and during most of the search, cops struggled to find any potential leads.

It is reported that a notebook and a dry bag were also found nearby. It’s unclear what’s in the diary, but experts believe it might be “salvageable.”

After detectives found items believed to belong to Laundrie, Lee County Sheriff Carmine Marcelo called the search “difficult” as he said water levels were “almost above the level of Chest”.

He added that the alligator infested waters made the probe “more dangerous”, while commending those involved.

Laundrie family attorney Steve Bertolino has since revealed that the 23-year-old’s body will be cremated and that no “traditional burial” will take place.

He also confirmed that Chris and Roberta were crying privately at an “undisclosed location” in Florida, Fox News reports.

Brian Laundrie has not been seen since the morning of September 13. Here’s a timeline of Laundrie’s latest comings and goings:

This is a developing story …