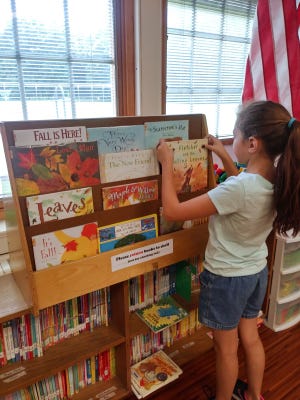 Do schools still employ librarians? Well, yeah, sort of. Most schools now refer to them as “media specialists” or “media center teachers”.

Libraries, like librarians, have turned into media libraries that do not necessarily revolve around books.

More than 9,000 full-time school library positions were cut between 2009 and 2016 in the United States, according to the National Center for Education Statistics. That’s a 15% reduction.

After 22 years as a librarian at Fredon Township School, Picone turned to teaching social science and basic skills when the district cut the traditional library program three years ago. She retired last January after 25 years with the district.

“It’s sad to see that libraries are not treated the way they should be,” Picone said. “I’m just sad that so many kids aren’t allowed to experience it.”

During her last three years at Fredon School, Picone said students told her they missed their weekly library sessions with her. They passed her in the hallways and asked her why she was no longer in the library.

Other districts have eliminated positions to reduce expenses.

The Glen Ridge School District cut the post of media specialist from the high school library in April, a move that was met with protests from parents. Several months ago, in a cost-saving measure, Cedar Grove dissolved the School Library Specialist position for all schools in the Cedar Grove School District.

Up to a fifth of all districts in the state did not have a certified school library media specialist on staff as of the 2018-19 school year, said Beth Thomas, president of the Association of New Jersey school librarians. Of the 116 districts on the list, 14 were from Sussex, Morris, Bergen and Passaic counties.

Schools and COVID:We surveyed 147 North Jersey schools about their COVID protocols for the fall. This is what they said

Thomas said these schools violate the New Jersey administrative code. The document states that all districts are to provide “library media services” including books, computers and other reference materials “under the direction of a certified school library media specialist.”

The transition from books to digital

School districts with libraries are adapting rows and rows of books to “media hubs,” which tend to prioritize online content in an increasingly digital world. A search of school personnel directories now yields fewer “librarian” job titles and more “media specialist” roles or something similar.

Masks in schools:Some North Jersey educators ‘relieved’ of reinstated mask mandate, out of their hands

Krista White, a scholarship and digital pedagogy librarian at Rutgers University, said dropping books wasn’t necessarily a bad thing. In fact, she said, it highlights a “fundamental misconception” about libraries: they never focused on books, just as libraries in the ancient world did not focus on scrolls or scrolls. clay tablets.

“The mission of libraries and librarians, at least for the last hundred years, has been to provide access to high quality, reliable information – the best information from the best sources for everyone to use,” White said. . “Clay tablets, scrolls and books were simply the means of recording and sharing this information. Now our information is created electronically. “

Wendy Wesighan, enrichment, technology and media specialist at Sandyston-Walpack School, said the main goal of the librarian has always been to help students search for information. The main difference today, with the advent of online sources, is determining what information is reliable or not.

“The Internet is an information network where students can get lost or be trapped by disinformation,” Wesighan said. “Students learn to collect, organize and use information of personal interest. The biggest challenge is teaching students to be safe and ethical when using and sharing information in this interconnected world. “

Much of White’s expertise centers on “information literacy,” a holistic term that teaches students how to assess what they consume in print, social media, blogging, and other forms. of content. In short, White said, students learn “where good information comes from, how to distinguish good information from bad information, and where to find the best information.”

A research project entitled Survey of School Librarians: Decline or Evolution? (SLIDE), which was published last month, found about 20% fewer librarians among 13,000 districts surveyed in 2018-2019 than ten years ago. The study also found that small rural districts, such as Sandyston-Walpack and Fredon, and schools with a higher proportion of low-income families and non-native English speakers were less likely to have a librarian on staff. .

Picone said eliminating library positions and cutting funding are “short-sighted” and will have long-term negative impacts on student education. She remembers many young children who struggled in school but got more involved when they read about a topic that interested them.

“I understand the financial cuts, but I don’t understand why it is the libraries (who are affected),” Picone said. “I think that’s a huge, huge mistake.”

Thomas, in an editorial published last month in NJ Spotlight, highlighted the correlation between a strong school library program and student success. A study she referred to found that libraries are the main contributor to higher literacy test scores and offset some negative effects of poverty in schools.

“School library media specialists are among the few educators in a school who reach out to every student, every year the student is in that building,” Thomas said. “This consistency allows media specialists in school libraries to foster relationships that ignite and nurture the love of reading. For many students, their first introduction to recreational elective reading is in their school library.

New Jersey lawmakers are trying to limit the reduction in force among librarians with a pair of identical bills introduced in the State Senate (S-1586) and Assembly (A-5782). The legislation would set the minimum ratios of media library specialists to students required in school districts – a school with at least 1,500 students, for example, would have to employ at least two full-time library specialists – and set the duration for which the employees must devote to the work of the school library per day according to enrollment.

The bill was presented to the Senate in February 2020 and to the Assembly on June 1. It was referred to the respective education committee of each organ, but has not gone beyond that stage.

Despite the growing attention to digital learning, library professionals are convinced that there is still a need for books. As White pointed out, almost all of human history has been recorded in print, and transferring everything to an online format would be a monumental task.

White also called the claim that everything is available on the Internet “incredibly inaccurate.” Much of the most valuable content is behind a pay wall, she said, and the aforementioned populations in rural and low-income areas may not have access to electronic resources.

For Picone, one of his favorite annual traditions at Fredon was to take fourth-graders to the Sussex County Main Library in Frankford and give each of them a library card. The students always had a good time, and she noted that for some it was their first visit to a public library.

She fears that such experiences will become less and less common as librarian jobs disappear. More importantly, she fears that students who use the library as their primary outlet to connect to school will have nowhere to turn.

“That’s the librarian’s role of care, and it’s sad that he’s no longer seen as important,” Picone said, adding, “If you fund libraries, you are making a mistake.”