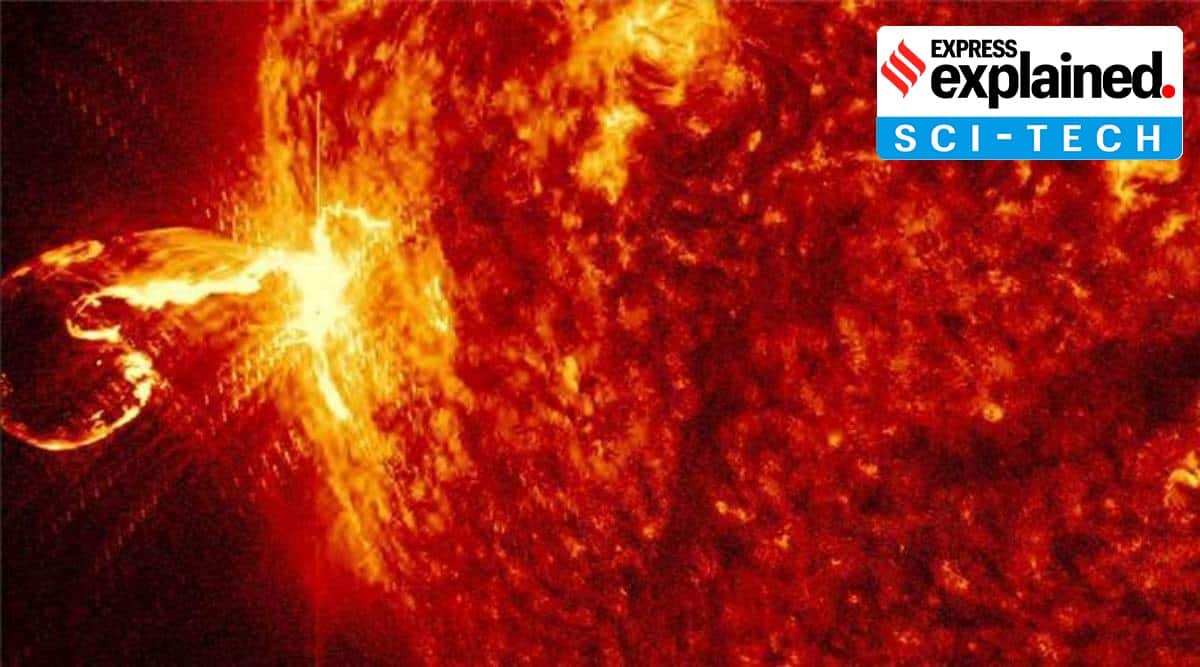 The impact of the solar storm could be a threat to the Internet. All you need to know: After witnessing a pandemic, a locust attack and a cicada invasion in 2020, the memes pages joked that humans are resilient and could even survive an alien attack. But can we survive without the Internet? No, not aliens, but our own Sun has the power to cause an “Internet apocalypse,” according to a new study.

The paper presented at the ACM SIGCOMM 2021 conference last month noted that a powerful solar storm can disrupt the Internet, damage submarine cables and communications satellites. Previous studies have shown that there is a 1.6-2% chance that an extreme space weather event will occur within the next decade.

What is a solar storm?

A solar storm, or coronal mass ejection as astronomers call it, is an ejection of highly magnetized particles from the sun. These particles can travel several million kilometers per hour and can take about 13 hours to five days to reach Earth.

Earth’s atmosphere protects us humans from these particles. But particles can interact with our Earth’s magnetic field, induce strong electrical currents on the surface, and affect man-made structures.

The first recorded solar storm occurred in 1859 and it reached Earth in about 17 hours. It affected the telegraph network and many operators suffered electric shocks. A solar storm that occurred in 1921 hit the telegraph and rail systems in New York City, and another small-scale storm caused the power grid in Quebec, Canada, to collapse in 1989.

A 2013 report noted that if a solar storm similar to that of 1859 hit the United States today, approximately 20 to 40 million people could be without power for 1 to 2 years, and the total economic cost will be from 0.6 to 2.6 trillion dollars.

The rapid development of technology has taken place over the past three decades when the Sun was in its period of low activity and there are very few studies on the ability of our current infrastructure to withstand a powerful solar storm.

“The Sun goes through an 11-year cycle – cycles of high and low activity. It also has a longer 100-year cycle. For the past three decades, when Internet infrastructure was booming, it was a sluggish period. And very soon, whether it’s in this cycle or the next cycle, we’re heading towards the highs of the 100-year cycle. So it is very likely that we will see a powerful solar storm in our lifetime, ”says article author Sangeetha Abdu Jyothi during a Zoom call. She is an Assistant Professor in the Department of Computer Science at the University of California at Irvine.

She explains that longer submarine cables may be subject to higher risks. Modeling studies to understand how connectivity will be affected nationwide have shown that the majority of cables connecting India will not be affected. “Even in the high failure scenario, some international connectivity remains (eg India to Singapore, Middle East, etc.). Unlike China, the key cities of Mumbai and Chennai do not lose their connectivity even in the event of major blackouts, ”the newspaper adds.

She explains that compared to the United States, India is less vulnerable, but we don’t know much about the strength of solar storms and whether a powerful storm can affect India. “Countries in lower latitudes are at much lower risk. But we need more studies to fully understand the effects. I am a computer scientist and my models show that Asia is safe. But what is the threshold, I can’t tell. We need new models that merge astrophysics, electrical engineering and understanding ocean characteristics, ”she adds.

How to save our internet?

Recently, it was estimated that a one-day Internet disruption in the United States can result in an economic loss of around $ 7 billion. The new document mentions a “shutdown strategy” that can help minimize the loss of connectivity during and after the impact of a solar storm. Similar to how we turn off power grids, a temporary Internet shutdown can protect our equipment during a solar event and ensure service continuity.

“We need a more systematic protocol to do this. NASA and the European Space Agency now have probes capable of detecting a solar storm. So we can get about 13 hours warning. Experts from different fields are to come together to design protocols for power companies and Internet service providers. In addition, today’s healthcare system depends on electricity and the Internet and we need a fallback strategy, ”she explains.

Professor Dibyendu Nandi of the Indian Institutes of Science Education and Research, Kolkata emphasizes the importance of the study with regard to the vulnerability of “our critical Internet backbone, namely submarine fiber optic cables”. “At ground level, the geomagnetic variations induced by solar storms can induce significant currents in networks that can conduct electricity. This is potentially dangerous. Although fiber optic internet cables are not themselves conductors, the study claims that the electronic components that are part of such networks can still be rendered useless by a very strong solar storm, ”explains Professor Nandi who is part of the network. of the Center of Excellence in Space Sciences. India to IISER Kolkata who is involved in developing the understanding needed to make solar storm forecasts.

“Independent solar observations show that solar super-storms capable of causing damage on such a large scale may only occur a few times in a century. Nonetheless, given their potential to cause large-scale disruption in our modern society, these studies help us prepare and take action to reduce their impact, ”he adds.