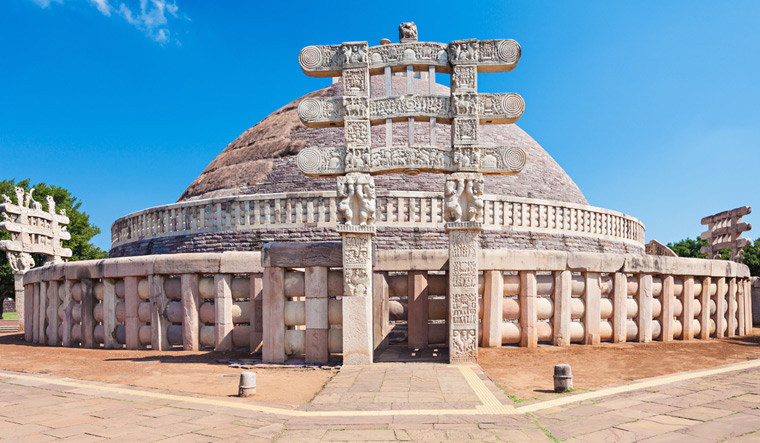 The Rock and Pillar edicts of the Mauryan ruler Asoka (r. 273-232 BCE) are inscriptions carved on pillars, gigantic boulders and caves. These are scattered in various places in the Indian subcontinent and Afghanistan. One of the notable leaders in the history of the world, Devanampiya (Beloved of the Gods) Piyadasi (one of the kind looks) Raja (The king) Asoka left a plan of his ideas and ideals in the form of edicts. Reflecting the emperor’s benevolent attitude and activities, the royal proclamation in the edicts was issued after the fateful Kalinga War of 261 BCE. The large-scale devastation caused by the war moved Asoka greatly and he abandoned the war in favor of victory in dhamma (straight path / piety). The concept of dharma (religion in Sanskrit) or dhamma (prakrit version of dharma) of the emperor denoted that this was not a religion, but a path of self-righteousness based on moral and ethical principles. The edicts of Asokan scattered throughout his empire were the messengers of dhamma. These first epigraphic documents in India were a living testimony to the greatness of the Emperor, very concerned about the material and moral well-being of his subjects. He not only insisted on high ethical standards for his subjects, but also set a high ideal for himself. Here is an emperor who said: “All men are my children”. The dhamma of Asoka based on certain moral principles and civic responsibility, has become the way of life of an individual. It initiates the policy of dhamma with the specific aim of unifying political units and people of different faiths. The pragmatic approach to this won the support of the rising merchant class and the general mass of the population. from Asoka dhamma became a glue force for the Empire. As a testimony to the Emperor, the Indian government adopted the four-lion pillar capital Asokan as its national emblem when the country became a Republic on January 26, 1950. The Wheel of dhamma was placed in the center of the Indian national flag.

Asoka was crowned in the year 269 BCE and took care of the various affairs of state and extended the territorial scope of the Empire. After eight years, the emperor turned to the kingdom of Kalinga, located on the eastern coast of India, roughly corresponding to modern Orissa and parts of northern Andhra Pradesh. Kalinga was a powerful and prosperous kingdom thanks to ocean trade. The famous Battle of Kalinga took place in the year 261 BCE, resulting in the victory of Emperor Magadhan. Kalinga was incorporated into the Magadhan Empire headquartered in Tosali. But the murder of around 100,000 people, the imprisonment of 150,000, the deportation of many and the large-scale devastation caused by the war moved Asoka very much. A remorseful Asoka changed her mind. Although Buddhist traditions speak of the conversion of Asoka to Buddhism by the monk Upagupta after the Kalinga War, the emperor most likely adopted the new religion after much thought. It was a gradual process. Asoka as the patron of Buddhism changed the course of history not only in the Indian subcontinent, but also in the Far East and Southeast Asia.

Asoka began to engrave his ideas on Rocks and Pillars after the Kalinga War. These inscriptions were vehicles to circulate his diary. Avoiding the previous path of Brahmanic faith, Asoka envisioned a new doctrine. It was quite different from the stated principles of Buddhism; Four Noble Truths, Eight Paths, transmigration of souls and others. He propagated certain moral precepts, which were common to all Indian religions. It was inspired by Buddhism to a large extent, but evolved in a new direction of lofty ideals relating to ethics and morality. The Asokan edicts engraved on the rocks and pillars throughout his empire were the messengers of dhamma.

Asoka’s inscriptions are spread over a vast area encompassing present-day Afghanistan, Pakistan, Nepal and India. James Prinsep first translated the Asokan text into English in 1837 and Piyadassi’s identification with Asoka was confirmed in 1915 after the discovery of an inscription. About 42 inscriptions on rocks, pillars and caves are currently known. These are written in three languages; Prakrit, Aramaic and Greek. The four scripts used are; Brahmi, Khoroshti, Aramaic and Greek.

Asoka had inherited Bindusara, a vast empire with a well-organized administrative organization. He attended to various state affairs for eight years, then turned to the Kalinga. The large-scale destruction and death changed the emperor’s heart and he was drawn to Buddhism. Buddhist missionaries have been sent across the continent as well as overseas. Sona and Uttara were sent to the Burma (Myanmar) -Thailand region. The brother and sister team Mahindra and Samghamitra traveled to Ceylon (Sri Lanka). India’s cultural contact with Southeast Asia accelerated, which had profound repercussions in the form of a cultural rapprochement between the two regions thereafter. The Emperor grants religious endowments, built viharas (monasteries), built eighty-four thousand stupas (reliquary mounds) and erected commemorative pillars for the spread of Buddhism. Asoka was one of the best builders in ancient India. Asoka’s monolithic stone columns were architectural wonders. The Sarnath Column was the most exquisite among the columns with its fine art of polishing, erecting, chiseling and shaping stone. The Sanchi stupa has remained a place of tourist attraction. A special class of called-in officers dhammahamattas (judicial officers) was appointed to spread the dhamma. He also called the Third Buddhist Council in 250 BCE to prevent divisions within Buddhism. It was decided at the conclave of Pataliputra to compile Saddhammasamgaha (true Buddhist doctrine).

Asokan inscriptions carved on rocks, pillars and cliffs have become a milestone in human history. Radiating from the Indian subcontinent and reaching the Far East as well as the Middle East, its impact has been enormous in various fields. India’s cultural contact with Southeast Asia accelerated, which had profound repercussions in the form of a cultural rapprochement between the two regions thereafter. The Buddhist missionary activities enshrined in the edicts made Buddhism popular in Myanmar, Thailand, Laos, Cambodia and Vietnam. Asoka’s contact with the Hellenic world was evident from reading the inscription. The edicts have a tremendous impact in shaping a timeline for ancient Indian history. The multilingual inscriptions bequeathed by Asoka became the first deciphered scripts and the phonetic scripts used there made pictographic writing relics of history.

Asoka emerges from the edicts as a leader deeply concerned with the well-being of his subjects and impartial towards all classes. These edicts proved the greatness of King, very concerned with the material and moral well-being of his subjects. The inscriptions prove that Asoka had a deep commitment to health care, environmental protection and animal welfare. His vision was way ahead of its time. His way to dhamma and ahimsa (non-violence) as enumerated in the edicts is very relevant in the contemporary world. The emphasis on state morality and the duty to protect its subjects as prescribed in the inscriptions carries much greater weight today in the context of state terrorism in many parts of the world. There were many monarchs in ancient and medieval times in Indian history, but very few were like Asoka, the Great. With unwavering zeal, Asoka accomplished his mission. The prescriptions, virtues and ideals enumerated in the edicts became the frame of reference for kings, rulers and individuals.